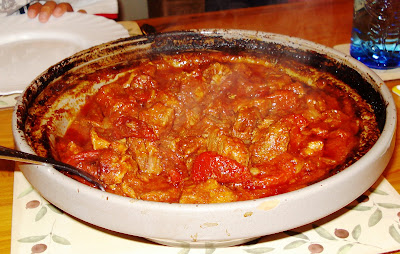 I think was so cold at the weekend as mentioned in my last post as I had just come back from a spur of the moment trip to visit my Brother and family on Holland for my Nephew's 10th Birthday and they were having glorious weather 28oc clear blue skys and hot sunny days - it was just like being on holiday - 5 days there and I did not want to return. There was lots of glorious food on offer - I have already told you how wonderful my sister in law is at cooking so I was looking forward to a great rest and indulgence, until my brother told me that he wanted to expand his little cooking repertoire and that we were going to cook a lamb tagine. Now if he had given me warning I could have prepared a suitable recipe, but as it was I had to play it by ear. I don't think we did too bad a job.
Lamb is not a popular meat in Holland, but we did find a Butcher who had a frozen rump of Lamb - 1.5kg (their cuts are slightly different to ours) so once thawed I got Dan (the Bruv) to cut into chunks, along with a large onion.
Then pan fried them in oil with random spoonfuls of spices Cumin, Paprika, Coriander.
Pour over a jar of passata 500ml and season. Adding a couple of teaspoons of sugar to take the sharpness out of the tomatoes.
Transferred to a warmed Tagine and the into the over at 150oc for 2 hours, then we added a jar of sun dried tomatoes and returned to the oven for a further 1/2 hour.
Served with a huge bowl of cous cous cooked with a vegetable stock and lots of finely sliced spring onions.
The meat was lovely and tender and although codged together it turned out tasty enough and not too spicy for the kids to enjoy.
Posted by Xinran at 12:36