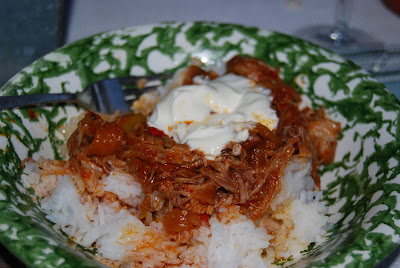 This is a brilliant recipe to scale up and do for a crowd of people. It can sit in the oven for hours until you are ready for it. Taken from the Jamie Oliver Cook at Home book a very pleasing and hearty dish. These quantities feed 4-6.
Pork & Chilli Goulash
2kg Pork shoulder, off the bone, skin off, fat left on.
2 Red onions - slices
2 Fresh chillies, de-seeded and chopped
2 Heaped tablespoons mild smoked paprika
2 Tsp Caraway seeds
Small bunch Marjoram or Oregano
5 Peppers - Capsicum/bell peppers - mixture of colours - sliced
280g jar of grilled peppers, chopped
400g can plum tomatoes
4 tbs red wine vinegar.
Heat the oven to 180oc. Heat a large ovenproof pot on the hob. Score the fat on the pork, season with S&P, cook the pork fat side down in a glug of olive oil for 15 mins on medium heat to render the fat. Remove pork.
Add onions, chilli, paprika, caraway seeds, marjoram/oregano leaves and more S&P. Lower heat and cook for 10 mins.
Add the peppers, grilled peppers and tomatoes.
Put the pork back in the pot and mix. Pour in enough water to cover the meat.
Add the vinegar.
Bring to the boil and place in the oven for 3 hours or so - the meat is cooked when it pulls apart with two forks, if it does not, then pop it back in the oven for longer.
I serve it all pulled apart on a large serving dish, with boiled rice and soured cream and some chopped parsley. 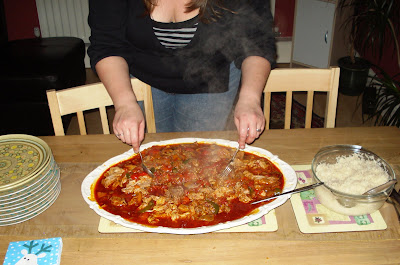 Posted by Xinran at 14:39 No comments: Links to this post 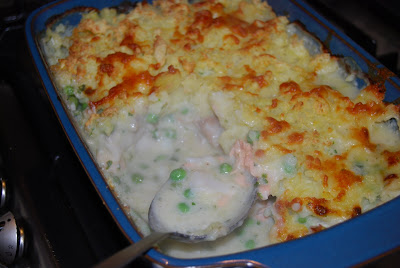 I have always loved fish pie, but sighed at the thought of having to poach the fish before hand, leave it to cool then flake the fish, whilst making a bechamel sauce and boiling the potatoes. It would always end up with a very fishy smelling kitchen and could be rather messy so I made them infrequently.

Until that is, I thought - why do I need to poach the fish? ... tradition? hmm maybe, its what my Mother and Grandmother both did, so I thought I would start a new tradition.
I have spoken many times of Gordon our great Fishmonger, he was once asked why his fish pies were so much better than the ones the person asking made, he replied "that's because I put twice as much fish in as you do". I remember those words when making my Firsh Pies.

Oh, so simple. Oven on at 200oc. skin and de-bone the fish.
Cut into hearty chunks, they keep their shape once cooked, giving you something to bite into.
Boil your potatoes and mash.
Make up your white sauce - usually its around 3/4pt, add chopped parsley.
Pour the sauce over the fish and prawns and peas, mix well.
Add the mash to the top with cheese if you wish.
Pop into oven for 25-35mins. 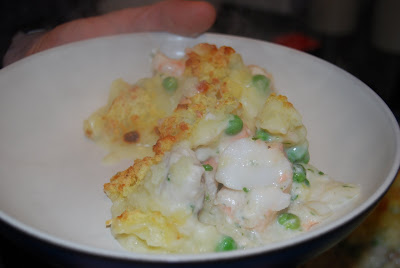 Posted by Xinran at 14:06 No comments: Links to this post 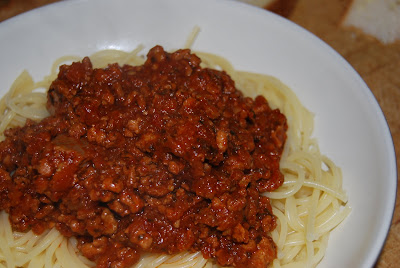 Hubby with low tolerance levels made another unexpected but welcome trip into the kitchen over the weekend. Whilst I was out shopping and failing miserably with any inspiration for presents he was getting all creative. Having listened to Nigel Barden on the Chris Evans Drivetime show on Radio 2 with his best ever Spaghetti Bolognaise recipe, Hubby decided to take this and customise it. Details of which are below:-

Spaghetti Bolognaise
Would probably serve 6 if you can bare letting anyone else have any!
500g Beef Mince
500g Pork Mince
200g Chicken Livers - Chopped (Hubby used 400g, great for me as I love liver, but too much for others)
2 Onions - Sliced
3 Carrots - Grated
3 Stalks Celery - Finely Chopped (Did not have in Hubby's, but he would recommend it for next time)
3 Cloves Garlic - Finely Sliced
500g Passata
150g Pancetta (Not included in Hubby's, but again he would recommend it next time)
400g Tinned Chopped Tomatoes
1 Tbs Tomato Puree
2 Tsp Thyme (dried)
1 Tbs Parsley (dried)
3 Bay Leaves
3/4 pint Stock
Sweat the onions in a little oil until translucent.
Add the mince and fry until almost dry.
Add everything else and mix well.
Bring to the boil.
Simmer or place in a low oven (130oc) for 3 or more hours, stirring occasionally. Hubby had it in the oven for almost 5 hours.
It really was the best ever Spag Bog I have had, there were leftovers after we'd had second helpings, so we scoffed those the following day as part of a Sloppy Joe Bagel, totally scrumptious and well worth the wait. 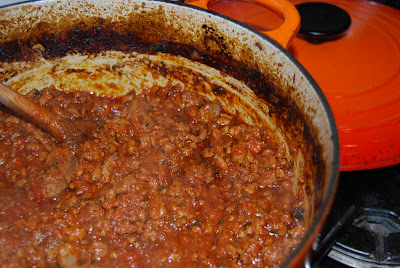