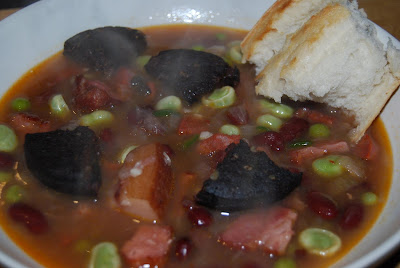 Hubby with low tolerance levels decide to locate the kitchen again last night, for a little experimentation and the results were pretty pleasing.
He works for a Basque company in the UK and frequently makes trips over to the Basque region of Spain. Over there everything stops a 1pm for a lunch hour and he often finds himself being taken out to local eateries for lots of homemade food. One of his favourites is the Red Bean Stew, apparently a dish that is cooked in every household from recipes handed down for generations. After talking to some of his work colleagues he came away with his own idea on how to replicate this dish.

Basque Red Bean Stew
Serves 6
1 Onion chopped
250g Morcilla or Black Pudding
5 cloves of garlic
75g chorizo, chopped into small chunks
300g Smoked bacon piece, chopped into chunks
2 cans of red kidney beans, keep the juice
1 litre hot water
Bay leaf
1 green chilli
1/4 tsp Cayenne
Couple of handfuls of broad beans
Gently soften the onion and garlic for a few minutes in a deep pan. Add the chorizo and bacon and fry for a couple of mins.
Add the kidney beans with juice and water, add the cayenne and bring to the boil and the leave to simmer, covered for at least an hour.
Near the end of cooking time add the broad beans and finely chopped chilli.
Cut the Morcilla into slices and the pan fry until crisp.
Serve up, with the Morcilla cut into chunks with fresh bread.
A tasty heart dish, next time he will use a ham hock that can be boiled beforehand to reduce the amount of salt in this dish, although it was on the high end of salty it was in no way overpowered by it and we both went back for seconds! Keeping the black pudding out of the main dish kept it in one piece and added another texture to the stew.
I think I will encourage him to make this again and perfect his recipe.
Posted by Xinran at 08:05