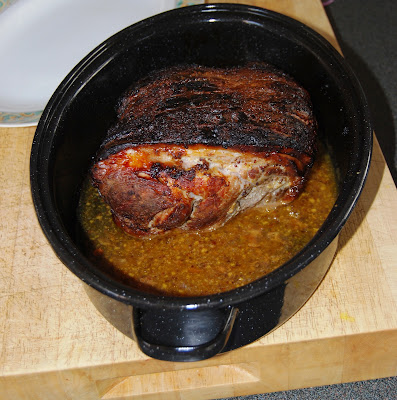 To round off my two weeks of 40th Birthday celebrations I had my lovely sister in law (who made me a birthday cake!) and her fabulous family around for Sunday lunch.  I advised them beforehand that they would be guinea pigs for the latest slow roast recipe I had found.  Again from the good food website a James Martin special:
Slow Roast Pork with Apples & Peppers
Serves 8
2.25Kg Pork shoulder joint - scored and tied

50g butter, softened
3 tbsp demerara sugar
3 tbsp wholegrain mustard
For the apples and peppers
3 onions, thinly sliced
2 Braeburn apples, quartered, cored and sliced thinly
6 large bell peppers, red or yellow, quartered with cored and deseeded
Couple of bay leaves
3 tbsp cider vinegar
3 tbsp olive oil
2 tbsp wholegrain mustard
2 tbsp demerara sugar
Heat oven to 146oc/140oc fan/gas 3.  Pop the pork on a sheet of foil, mix the butter, sugar and mustard together with 2 tsp of salt and rub all over the joint, then fold the foil to make a tight parcel and put into a roasting tin.  I realised when putting the ingredients together that a) I did not have demerara sugar so mixed half/half golden granulated and dark muscovado and b) I did not have enough wholegrain mustard, so again a 50/50 split wholegrain and dijon.
Put the onions, apples and peppers into a large shallow roasting tin, toss the bay leaves. Mix the vinegar, oil, mustard (I only had dijon at this point) and sugar (golden granulated and dark muscovado again) with 100ml water and pour all over.
Roast the pork for 3.5 hours, whilst you cook the peppers on the shelf below for the first two hours.  Remove the peppers dish, cover and leave to cool.  At this point I thought that two hours was slightly too long for the peppers as, the onions were in places blackened and the dish was dry, which is why I covered it with foil to gain a bit of condensation.  Next time I will cook it for slightly less.
After 3 hours remove the foil from the pork, making sure all the lovely juices are caught in the tin, pop back into the oven and increase the temp to 200oc/180oc Fan/gas 6, roast for a further 30 mins.  Remove from oven, cover and rest for 20mins.  Put the peppers back into the oven for 20 mins to finish. (I kept them covered with foil to keep juicy).

Serve thick slices of pork, roast peppers & apples, roast potatoes and a few peas with lashing of the delicious pork juices poured over the top.


The pork was so tasty and extremely tender, the peppers and apples had a sweet, sharp and tangy taste.  The whole dish was an absolute winner. 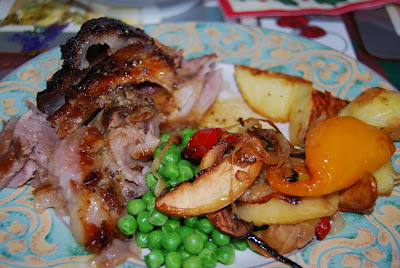