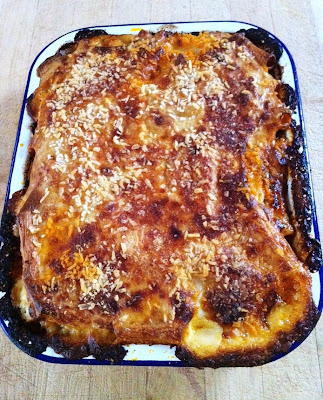 Thinking back to our lovely summer holiday last year to the Greek Island of Kephalonia bought back memories of the great food to be had there, stifado, kleftico, baklava and so on.  So I rootled through my Rick Stein's Mediterranean Escapes cook book and found a hearty and naughty Greek dish to try, Pastitsio, which looks just a minced beef macaroni cheese, but tastes 10 times better with quite complex herbs and spices and gutsy red wine thrown into the mix.

For the white sauce, melt the butter in a pan and the flour and stir over heat for a minute, with a balloon whisk, beat in the milk and bring to the boil, if you have lumps keep whisking.  Season with nutmeg and S&P.

Preheat oven to 180oc.  Stir 250ml of the white sauce into the pasta with the beaten eggs and half the cheese.  In a large shallow ovenproof dish spread one third of the pasts and cover with half the meat sauce.  Add another third of pasta and the rest of the meat, finish with the final third of pasta and pour over the remaining white sauce. Sprinkling the top with the remaining cheese and breadcrumbs.  Bake in oven for 40 minutes.

Serve with a green salad and plenty of gutsy red wine. 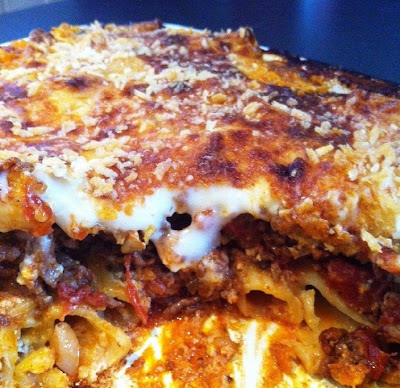