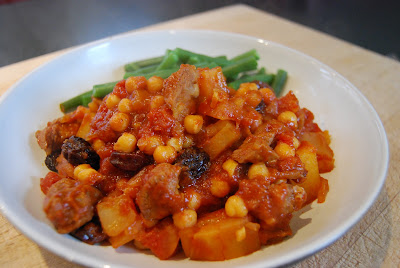 This is another wonderful Hairy Biker's inspired diet recipe.  As with the previous recipe in their book it is for 5 people, I have re-worked it for 2 people. A wonderfully spiced dish, which I would think could work very well in a slow cooker.

300g lean lamb leg steak, trimmed of fat and cubed, season with S&P
2 tbsp dried fruit (HB's called for apricots, but I only had a raisin, sultana & cherry mix)
1 can chick peas, drained

Set oven for 180oc/Fan GM4. Heat oil in a casserole dish, add the seasoned lamb, onion and garlic and stir fry for 1 minute.  Sprinkle over the cumin, coriander, cinnamon and chili, cook for a further 2 minutes, remove from heat before the spices burn.

Tip in the tomatoes and water, honey and chickpeas.  Crumble to stock cube over the top and stir well.  Bring to a simmer then cover and cook in oven for 45 minutes.  Stir in the sweet potato and dried fruit/apricots and return to the oven for a further 45 mins or until the lamb is tender.

Serve with some chopped parsley and a little grated lemon zest and a side of green beans.
Posted by Xinran at 14:03