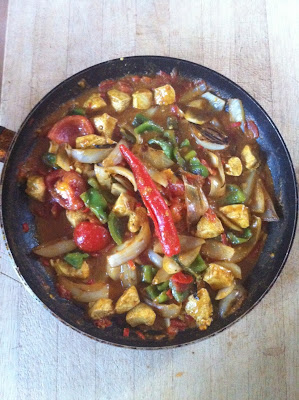 I love the Hairy Bikers shows, they way they cram flavour into food and totally love the excess they pack into their recipes and how they obviously love food, so I was rather surprised when their latest venture was The Hairy Dieters - How To Love Food and Lose Weight. Selection of recipes HERE

Having watched the show and seen that they lost several stone between them and as I was a little impasse with my own diet I rushed out to get their latest cook book.  It was out of stock and remained so for a couple of weeks, even on amazon!  When I finally did get my grubby little fingers on a copy I was amazed, they have managed to pack so much flavour into their recipes and reduce the calories.  A cook fest ensued.

This is the first recipe I tried, I halved the quantities to suit two people and it worked out about 18 WW pro points per serving including 75g dry weight of rice.

Chop 4 of the chilies, deseed a couple of them first if you don't want it too hot. Split the other two base to stalk.  Cut the chicken into bite sized chunks.

Add the chicken and whole chillies and cook for a few minutes turning the chicken frequently.  Pour over the 200ml water and stir in the yoghurt, reduce heat and simmer for about 8 minutes.

Whilst the chicken is cooking, heat the remainder of the oil in a frying pan and stir fry the onion and pepper over high heat until lightly browned.  Add the quartered tomatoes and fry for a further 2 minutes

Mix up the cornflour and water.  Once the chicken is cooked stir in the cornflour mix and simmer for a few seconds, stirring until the sauce thickens.  Remove from the heat and then add the stir fried vegetables.  Mix together and serve over rice and revel in just how damn good this is.
Posted by Xinran at 14:42