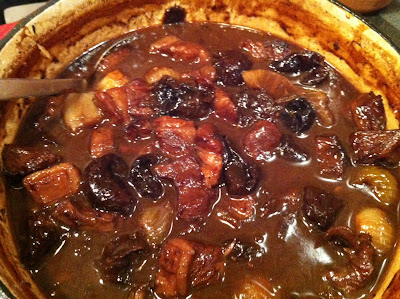 Hubby happened to have Monday off work, this meant he was running round doing a bit of shopping here, a few odd jobs there and unusually having dinner ready for my return from work.  The previous night we happened to catch one of Nigel Slater's 12 Tastes of Christmas and were both drooling over the Mulled Lamb he made.  It looked utterly scrumptious so Hubby decided that would be Monday's dinner.  He found the recipe on the BBC.co.uk/food site.

S&P
Pomegranate seeds and mint leaves - We did not have

Preheat oven to 180oc/GM4
In a pestle & mortar grind the cumin and cardamom seeds, then add the ground cinnamon.
Mix the spices with the oil and rub the paste over the lamb chunks.
In a heavy bottomed casserole pan fry the lamb in more oil until browned, remove from the pan and put to one side.  Add the shallots to the pan and fry for 5 minutes until golden then return the lamb to the pan.
Stir in the flour and cook through.
Pour in the port and the stock, add the prunes and cinnamon stick.  Season well
Cover and bake for an hour or more
Serve with pomegranate seeds and mint.


This turned out to be a most unctuous, rich, glossy dish.  The spices and port were exotic yet comforting and the prunes added a lovely sweetness, the lamb was so tender just falling apart.  I served with cabbage, but next time would make a pile of cous cous to soak up the yummy sauce and make sure we have the pomegranate and mint as I think they would cut through the richness and give it a little more balance, but it was really so delicious that instead of saving two portions for later, we scoffed the lot! 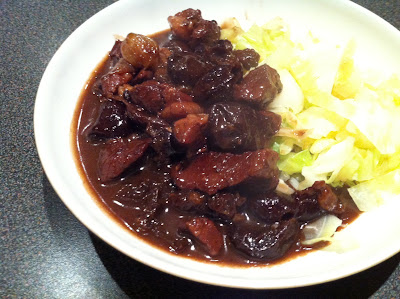