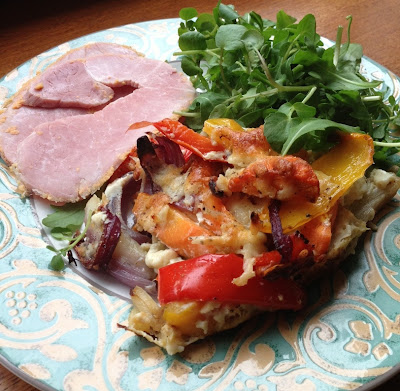 A cheeky little cheat for all those that love quiche, but not the calories they contain.

I got this recipe from a Weight Watchers mini cookbook for meat free meals.  It really hits the vegetable quota and still give you a feeling of being slightly naughty.

150ml skimmed milk
30g Manchego cheese, grated (recipe called for half fat cheddar, but life is too short for that stuff, besides I love the creamy,nutty, salty flavour of Manchego)
One cal spray
S&P

Preheat oven to 220oc.  Place all the veg on a baking tray and coat in one cal spray and a little S&P, roast for 20 minutes.

Boil the potatoes until tender, drain and then mash adding in the horseradish.  Then place the mash into a loose bottom baking tin 20cm dia (mine was 24cm so my potato base was not as deep as it could have been) and press down.  Put into the oven for 10 minutes until the potato has formed a crust.

Pile to roasted veg on top of the potato and in a jug mix together the milk and egg then pour over the veg.  Scatter the cheese on top and a final S&P and return to the oven for 10-15 mins until the top is set and golden.

A nice little dish, but a bit tricky to get the quiche off the base of the pan, could be that I did not cook my potato base long enough for it to firm up, but it was nice enough.  Served with rocket and a couple of slices of ham, the horseradish really perks up the flavours. 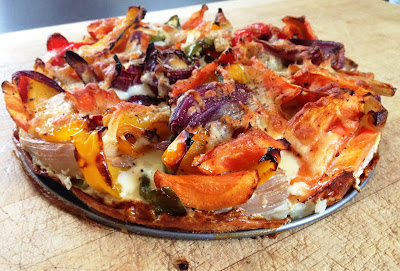