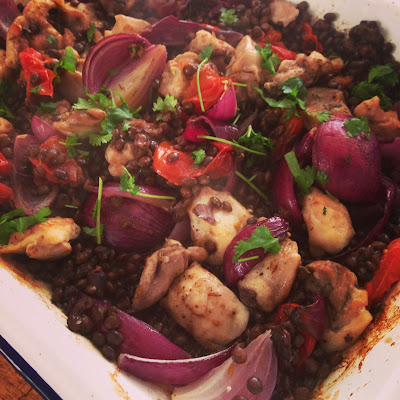 Lentils - never had much luck with them before, the whole soaking then boiling mularky sometimes they ended up squishy or gritty so I pretty much gave up on them, until I found the wonderful invention of pre-cooked microwavable puy lentils!  I have to thank this recipe below from the October issue of Good Food magazine for bringing it to my attention, I would never have looked for them otherwise.  I have tweaked the recipe to suit two people.

Heat the oven to 180oc fan.  Toss the chicken and onion in the oil and roast in a baking tray for  10 mins.  Add the tomatoes and cumin seeds and cook for a further 10 mins.

Towards the end of cooking, microwave the lentils as per instructions and then tip them over the chicken mixture, pour over the red wine vinegar and toss together, sprinkle over the coriander and serve.

A really simple, tasty light evening meal.  Looks more impressive than the sub total of the ingredients make it. 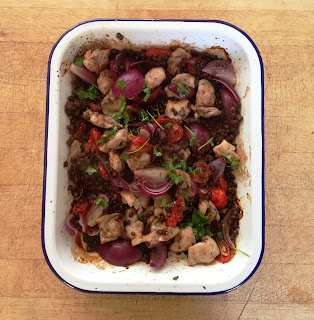