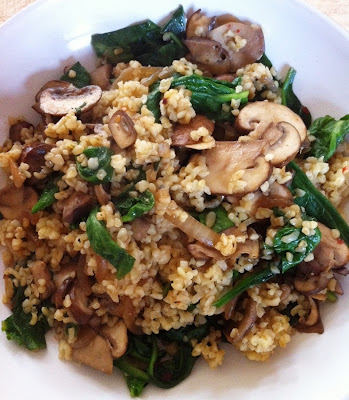 Tried this little recipe out last night and it was surprisingly good, my first time cooking bulgar wheat and it turned out a treat.  As before it is a dish from Weight Watchers that I have modified slightly.


Add the bulgar wheat and stock to a saucepan, bring to the boil, cover and simmer for about 12 mins or until the bulgar is tender.
In a large non-stick frying pan heat up the oil and add the onion and garlic, cook until they are golden, about 8 mins.  Add the mushrooms and chili & seasoning and cook until tender and golden. Add spinach to wilt for 1 minute. Mix in the bulgar wheat and serve.
Very tasty side dish that on the original recipe would serve 4, but I took two servings to make it a main dish, served with some pan fried chicken on top.
Posted by Xinran at 12:43