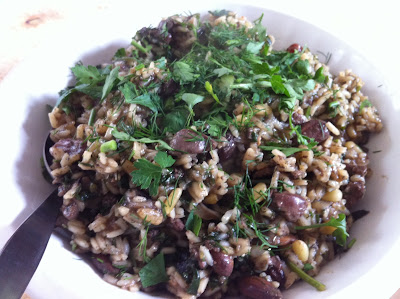 Armed with a copy of the Hairy Bikers Cook Book, Hubby mooched back into the kitchen this weekend to make their Chicken Liver and Almond Pilaf and oh my, it turned out very very well indeed.  Hubby really seems to have caught this cooking bug and I am not complaining he is more willing to try recipes that I would normally overlook and so far they have all been delicious.

I will include the recipe for 4 people below even though we altered the quantities for just the two of us.  It works out about about 18 WW Pro Points per serving.

1 tbsp currants (we used a currant, raisin mix and would definitely add more that a tbsp next time)
1/2tsp allspice
1 tsp dried basil (Had none in the cupboard, so used oregano/marjoram mix)

450g chicken livers, chopped
bunch of dill chopped (We used more than recommended, but it was none the worse for it, love dill)


Melt the butter in a pan and add the garlic & onion, sweat for a few minutes.  Stir in the pine nuts and currant, cook for a couple of minutes then add allspice, basil and chicken livers, brown lightly.
Season them with S&P and add most of the chopped dill and parsley then remove mixture from the pan and set aside.
Toss the rice in the butter residue until well coated, pour over the stock and bring to the boil, then reduce the heat and simmer gently until the rice has absorbed some of the stock.  Fold back in the chicken livers and then cover with a lid and stand for 15 minutes.
Serve with the leftover dill and parsley and enjoy.

I cannot express how scrumptious this recipe was, the chicken livers were soft, there was an initial hit of dill followed up by the delicate allspice, crunch of almonds and the sweetness of the dried fruit mmm, mmm
Posted by Xinran at 13:05