All in One Brunch 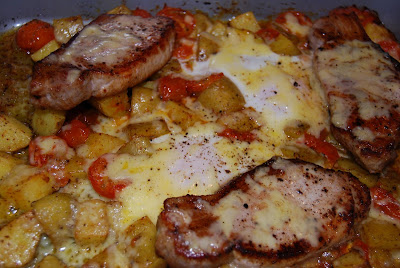 With the sun actually out and shining at the weekend, I took the opportunity to get into the garden and do some much need smartening up, so first thing on Saturday I stepped into the garden to sweep, weed, prune and shovel working up a hunger whilst doing so.
For brunch I decided to pick out a recipe from Eats Like a Girl her take on Huevos Rancheros and take it a step further.

All in one Brunch
Couple of handfuls Cherry Tomatoes
Couple of handfuls of diced potatoes
2 Eggs
3 Pork loin chops, sausages would have been good, but I didn't have any.
Cayenne Pepper
Grated Cheese
I halved the tomatoes and put then on an oiled tray to roast in the oven for 20 mins at 180oc. Dried the diced potato on kitchen roll, then popped them into the oven on another oiled tray, seasoned with S&P. After 20-30mins the tomatoes are sticky and reduced and the potatoes crispy and brown. I added them to the same pan and mixed in a little Cayenne to give it a kick. Placed the pork loins on top which I had already pan fried in a little butter, till slightly crispy, only a few minutes on each side. Cracked a couple of eggs over the top and placed the whole lot back into the oven for 5 or so minutes, until the eggs were cooked, also added a handful of grated cheese for extra naughtiness.
The end dish was very satisfiying and delicious and just the thing after the physical work in the garden.
Posted by Xinran at 15:20