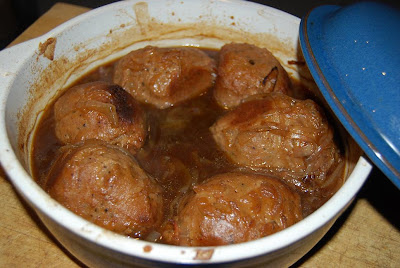 I was so pleased at having found a butcher in Uttoxeter that made this old fashioned dish, I could not wait to get them into the oven.
Faggots were very popular in war time cooking as they turned the offal of pork, especially the liver, heart and belly into a delicious feast with very little effort. The offal would be minced then combined with breadcrumbs, plenty of herbs, particularly sage, salt and pepper then moulded into balls and cooked in an onion gravy, but their popularity waned in later years. I think the current economical situation and the rising of frugal cooking could mark their resurgence to popularity.
When I was growing up the manufactured Brain's Faggots would always be a treat. Having never had handmade faggots before I hoped they would live up to my childhood memories. Boy, did they ever and then some!
I decided to place the Faggots into a lidded crock pot and to pour over a caramelised onion gravy I made quickly with a couple of sliced onions fried with a little sugar, till just turning brown on the edges and about 750ml of Oxo beef stock, sprinkled a bit of flour in the sauce to help thicken, then I popped them into the oven (back to behaving itself for the moment) for about an hour as the faggots were so heavy and solid, I thought it would take a while.
They were magnificent when they came out, barely reduced in size with a glossy onion sauce coating, served with piles of creamy mashed potato and frozen peas - just like my childhood, but much, much better. My next task it to make some myself (or cheat and go back to the butcher!). Plenty leftover to freeze as well.
Posted by Xinran at 10:53