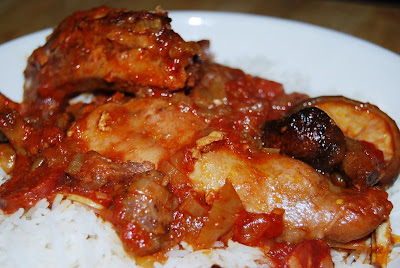 I have been meaning to attempt more game dishes. Game is something I have not cooked much of and when I have cooked it I have had a few terrible dishes, so my confidence is knocked and I tend to avoid it, but having read the wonderful blog of Hank at Hunter Angler Gardener Cook I am eager to have another go. I took one of the rabbits I bought at the game butcher a couple of weeks ago out of the freezer and had him defrosting overnight then I went and hunted out a recipe I saw on Girl Interrupted Eating for Slow Baked Rabbit with Chorizo & Wild Mushrooms .

Having followed the recipe I popped the dish into the oven and settled down for a wait. The smells coming from the kitchen were wonderful, the sherry and cinnamon were so rich and spicy. Checked the dish after 1 1/2hrs - the rabbit was still rock solid, so back into the oven for a while longer, checked again after 2 hours and still hard bunny. Eventually after three hours with the return of Hubby (he had decided a quick pint at the pub would whet his appitite), I served up the dish at Hubby's request on a bed of rice.
The sauce was so delicious - I am pleased I used the same amount of ingredients for 4 people on the sauce but only used one rabbit, this meant there was still a lot of juice to be soaked up by the rice and took away from the slight disappointment of the rabbit, which was pretty dry and firm, no way this was going to pull away from the bone.
Maybe it was the fact that the rabbit had previously been frozen? maybe I should have altered the timings or temperature? I don't know, but another less that happy experience with game :(
I will not be deterred. I have another bunny in the freezer for which I will find a different recipe and I really want to try Hank's Pheasant Cacciatore . I will try this recipe again, but substitute chicken for rabbit as I will continue to dream about that scrummy sauce.
Posted by Xinran at 12:43