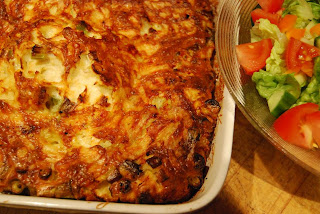 Last night I chose another recipe from the February edition of Good Food Magazine. Something cheap and cheerful - the Cheese Bacon & Onion Puff. Handy, as it consists of mainly storecupboard items for me. It was a take on Toad in the Hole, without the Toad, but replaced with bacon & cheese:-

Basic Batter
140g Plain Flour
4 Eggs
200ml Milk
All whizzed together in a blender (or the 30+ year old Osterizer that I have in my possesion, still plodding away, with only a minor smell of burning as the motor decides it has had enough on this attempt, but will cool itself down and be ready for the next time!)
Small knob of butter
2 tbsp grated Parmesan
8 rashers Streaky Bacon - chopped
4 Spring Onions sliced
140g Grated Chedder
Heat oven to 230C/fan, 210C/gas 8. Grease round (or square in my case) dish approx 22cm wide, then dust with the parmesan.
Add butter to frying pan and sizzle the bacon until crisp then leave to cool.
Add the bacon, onions and cheese to the batter and mix well.
Pour out into dish, then cook for 30-35mins. Dish will puff up and become golden.
Serve straight away with a crisp salad.

Hubby was rather impressed with the dish, but I found it a bit too stodgy and was pleased the salad was there to cut through and lighten the dish.
It was impressive when it came out of the oven though, rather like a souffle, which quickly deflated in the centre, despite the grease dish, it still stuck the the proverbial to a blanket. I think this may become a dish that is made only when there is nothing else in the house.
Posted by Xinran at 08:44