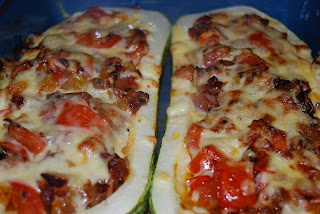 Last night was an old favourite standby - Stuffed Marrow. I love this recipe because you can literally fill the marrow with anything, no doubt there will be several versions of this dish in the months to come.
I must also explain that although I like cooking I hate shopping and do pride myself on combining whatever is left in the cupboards to make just one more meal before I am forced to the shops, so last night I was able to use the left over streaky bacon from the Cheese Puff dish and some condemned counter tomatoes. I know that we must all be thinking about the air miles our food travels and stick to local, but sometimes a marrow from Spain just looks so delicious that it is popped into my basket and sod my carbon footprint. I would miss too many foods if I tried to cook only what is in season so some items do slip through.

Set oven to 200C. Take a frying pan and a dash of oil and fry the bacon and onion, season as wanted. When the bacon is fairly crisp add the tomatoes and spin round the pan briefly.
Lay the scooped marrow halves side by side in a ceramic dish, add the bacon mixture on top on the marrow, season a bit more. Cover in foil and bake in oven for 30-40 mins. Remove the foil and scatter on the cheese, place back in the oven for a further 10 mins. Serve.

Normally, I would have mixed breadcrumbs into the mixture, this helps soak up the juice of the marrow, but I had none so the dish came with its own juicy liquid.

I suppose I should add to my New Years Resolutions:-
1) Cook more of what is in season and watch my air miles.
2) Step away from the supermarket and source local foods.

Given my hatred for shopping, this may be more tricky, as I do like to get everything in one go. I do know of some fab little local butchers and a fishmonger, but getting to them on a regular basis is the problem - something I will have to overcome, also I must force myself out of bed on a Saturday and visit the local market.
Posted by Xinran at 11:40