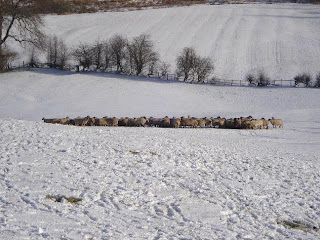 After sifting through the pot of cold chicken carcass stock last night I was ready to make a large batch of parsnip and swede soup. This was to be portioned out and then frozen in line with NY resolutions to make more soup and put food in freezer for later consumption, this is mainly so I don't get tempted with a takeaway or some form of slutty processed crap from the supermarket.
With my little halo shining Hubby and I had a small bowlful each with the remainder squirreled away. Whilst it was bubbling away I whipped up two individual Shepherds Pies for dinner - again I won't post the recipe as it was a bog standard lamb mince, onions, carrots in beef stock with a mashed potato topping, although the magic ingredient whilst cooking the mince is a dollop of HP sauce and grated cheese on top of the potato.
They did look mighty fine, but we were so eager to eat, I completely forgot to take a photo of them. Instead I have posted is a pastoral scene of sheep on frozen hillside during a walk around Tissington taken last January, what is not in the picture is the farmer on a Quad Bike who had just 'Shepherded' them into the field and fed them - there who says I did not stick to the theme!
Posted by Xinran at 11:58