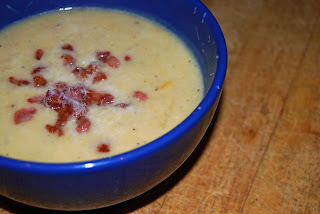 My latest foray into the kitchen was to use up what ever veg was to hand, this was a bag of swedes from the cheap and cheerful corner of Tescos and some local parsnips. In line with resolution no. 1 - make more soups, I hatched a plan:-

Swede & Parsnip Soup
1 medium swede - peeled and chopped
400g Parsnips - peeled and chunked
1 onion - chopped
Oil
500ml Veg stock
250ml Skimmed Milk
Thyme
Cubed Pancetta - Optional
In a large pan put the oil, onion, swede and parsnips, on a fairly high heat I swizzled them around until the onions & parsnips caramelised slightly, I then added some dried thyme (none in garden or fresh to hand) salt and pepper. Add the veg stock and milk and bring to the boil before simmering for 15-20 mins. I then took my trusty hand blender and whizzed away until most of the chunks were smooth but not all.
As a naughty extra I took a pack of pancetta cubes and fried them till crispy, these were then served on top of the soup with some doorsteps of crusty bread and butter.
The rest of the weekend was a bit of a culinary abyss - slobby pizza on Saturday night and a really cannot be bothered to cook anything Sunday consisting of a bacon butty. I did however manage to make it over to our local game butcher and picked up a couple of frozen rabbits, I have found a lovely receipe (if only I could remember where from so I can give credit where credit is due) for a Rabbit and Chorizo Stew which I will try next weekend and some lovely smoked bacon, which is just too delicious - hence the bacon butty.
Posted by Xinran at 12:52