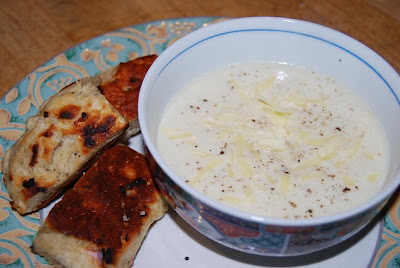 Friday evening was going to be a sit in front on the TV waiting for the beef stew to cook slowly in the oven. I should know by now that nothing is ever simple.
Having put my stew in the oven, basic stewing steak, carrots, onion and beef stock, bay leaf and a sprinkling of flour - I don't bother to brown the meat, just chuck it all in one crock pot and load into oven on a low heat for several hours - I thought why not run up a little batch of soup and some bread to go with it.
I had bought a pack of just add water bread mix, which I wanted to use more like foccacia so to cook I put it into a shallow baking tray, turned the heat up on the oven to 200oc for 15 mins thinking that the stew would not mind for a short while then set about making the soup.

1 Medium Cauliflower, broken down into small florets
1 Onion Chopped
3/4 Pint Veg Stock
3/4 Pint Milk
Handful of grated Mature Chedder
Put the onion into a large heavy bottomed pan and fry gently in oil, add the cauliflower and veg stock, bring to boil and simmer for 15mins. Add the milk and simmer until cauliflower is soft. Blend until smooth, toss in the chedder and season.
Whilst the soup was simmering, I noticed to my horror that the oven had stopped working, leaving the bread and stew in a rapidly cooling state. This is an intermittent problem with the oven and it usually kicks back into life after a few minutes, but not this evening. I thought I could take the stew out and put it into my cast iron pot and carry on cooking on the hob, until my brain remembered that I had the soup in it, so I crossed my fingers left it in the oven and just took the bread out as my brain had an idea!
I cut the bread into biscuit sized chunks and fried them in a little oil until they had a crunchy brown crust and the dough inside had at last cooked through - they were not terribly light, in fact I think I could have used them a doorstops, but along with the soup they were good for dunking.
The oven did eventually start working again and continued to cook the stew for several more hours. The stew seemed to be none the worse for its interruption, still giving up soft juicy meat and thick gravy, lob a handful of frozen peas in and tuck in.
Posted by Xinran at 13:17