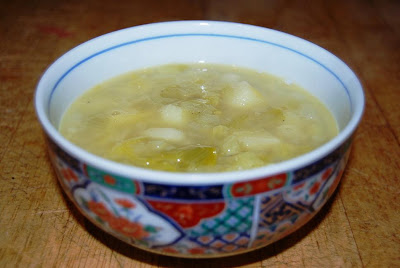 Pondering what to make on Wednesday night, as I had forgotten to take anything out of the freezer and the cupboard was a little bare, I sought inspiration from other bloggers and came across the wonderful blog of Ximena at Lobstersquad and her easiest ever soup.
http://lobstersquad.blogspot.com/2009/01/easiest-ever-soup.html#links
Knowing I had leeks and potatoes in I set to making it and can agree it is too easy!
500g Peeled and chopped potatoes
500g Sliced leeks
1.2 Ltr water
40g butter - I used the glorious President Butter, such a treat.
Salt and Pepper.
Add the potatoes and leeks to the boiling salted water. Cover and leave for 20 or so mins until the potatoes are mushy. Add the butter and lots of pepper. Serve. Simplicity, I would have added a grate of Parmesan or Cheddar if I had thought about it, but I was enjoying it too much.

Later on for a little snack I popped the bones from the belly pork dish I made on Sunday into the oven for an hour sprinkled with salt, pepper and Chinese five spice. Tasty and just right for nibbling in front of the TV.
Posted by Xinran at 08:02